For the latest Smart Cookies Breakfast Club,  James Church shared his top tips on how to become an Investable Entrepreneur.

Investors don’t back entrepreneurs, they back Investable Entrepreneurs.

For many entrepreneurs, their dreams are limited by the cash they have available to build, implement and scale their idea. By understanding how to stack the odds in your favour – you will be able to secure the capital needed to achieve your entrepreneurial dreams.

James Church is the author of Investable Entrepreneur: How to convince investors your business is the one to back, and co-founder and COO of Robot Mascot, the UKs leading pitch agency.

James is passionate about working with founders to present a clear, concise and credible business case to investors.

He’s on a mission to stop great ideas failing due to poor communication and is frustrated to see so many founders fail to raise the capital they need because they’re unable to convince investors their business is the one to back. You can watch the replay below or read on for a summary. 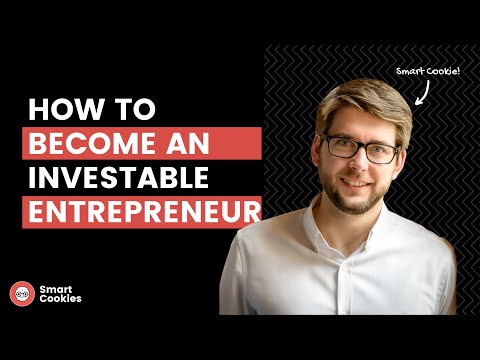 More capital available than ever before

Over the past decade, we have seen unprecedented growth in entrepreneurial investments. We’re living in a time and a place that if you’ve got a billion-dollar idea or a multi-million-pound idea, there are hundreds of thousands of people out there with the capital to fund it. There’s the crowd, there are angel investors, there’s VCs, there are family offices, there are whole organizations set up with the sole purpose of giving you money in a way that there just wasn’t even five years ago, but certainly a decade ago. So here’s what’s been happening over the last five years. We’ve seen 150% growth in the amount of capital being invested across Europe in startup and scale-up businesses, 150%. Even in 2020 when the whole world was in lockdown it was a record-breaking year, the most money ever invested in Europe. And for those of you in the UK is good news because London is by far the biggest center of Europe in fact in money invested in London on its own accounts for the rest of the top five put together. So the places two, three, four, and five combined is less than the amount of money that’s invested in London and the UK accounts for five of the top 20 European cities. So the UK is by far the best place to be raising investment in Europe So here’s what the average angel investor looks at on an annual basis: They get 10 pitch decks a week on average of which one is of interest, but they make just two investments a year. So that’s 520 pitch decks are sent to them every year result in just two investments. With VCs it’s a very similar story – they invest in one in every 150 deals that they see. So this basically means that less than 1% of businesses are successfully raising investment, which is bizarre. So if there’s more money than ever, why are less than 1% of businesses being funded?

Something is getting in the way…

There was just so many boxes not being ticked – founders weren’t communicating to investors in the way that they wanted to understand the business. And that’s what it boiled down to.

Over 80% of the investors James talked to said that communication was the biggest barrier.

Let’s imagine we’ve got two people who look the same and to an outsider, they may even sound the same, but one’s speaking English and the other is speaking French. They’re talking to each other but things are just not getting done. They should be working well together. They’ve each got something the other wants but they’re just not speaking the same language. And this is what’s going on between investors and founders. So investors talk the language of risk, assets, proof and implementation. Whereas entrepreneurs like to talk about opportunity, income, possibilities and ideas. And essentially this is putting up a barrier between the investor and the entrepreneur.That’s the biggest reason why just 1% are getting investment, even though there’s more money than ever.

So who do investors back? Investable Entrepreneurs

These investible entrepreneurs are those top 1% who successfully secure funding. Investors could be investing in property, they could be investing in stock markets, their whole goal is to grow their wealth. But many are choosing to invest in entrepreneurs and that’s because they think they’re going to get astronomical returns. They know it’s a high risk, but it’s also an extremely high reward.

An investible entrepreneur looks like three things to an investor. First you need to be highly resourceful. You’re able to get people to buy into your vision. Highly resourceful entrepreneurs can make stuff happen. They can attract talent when they need it. They can attract commercial partnerships. And of course, they can attract capital. You can get people to buy into your vision and you can grow an amazing team and network around you to make stuff happen.

How do you demonstrate this to an investor?

How can you prove to them that you have what it takes, you’ve got all of three assets in your locker and you’re the investible entrepreneur that they can back?

You then have your financial projections. These are the things that demonstrate the financial risks that you’re asking the investor to take as well as the potential rewards they could get.

And then you have your business plan, your business strategy. This is where you can demonstrate to an investor that you understand how to create commercial success.

As an investor I now know the vision you’ve pitched to me. I understand the risks, you’ve shown me the financial projections, but how are you actually going to get to those results? What are the stepping stones you’re going to take to get me to that commercial reward, to get me to that profitable exit?

By having these three critical fundraising assets in place  you can demonstrate that you’re an investible entrepreneur to an investor. You can send them those as physical assets and say, “We’ve ticked all your boxes. We have got the plan to deliver you a return.” If you don’t have the right pitch and it’s not backed up by a credible financial forecast and a believable business plan these three documents aren’t in place, the investor won’t view you as an investible entrepreneur.

With these critical fundraising assets in place – your pitch, your projections, your plan – you’re signalling to investors that you’re an investible entrepreneur, that you can be trusted with their money. 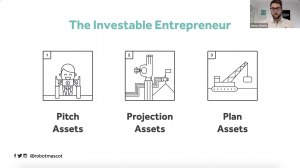 Essentially investors are sitting on top of a massive pile of cash and it needs to be deployed. They have to protect their wealth, it’s no good in the bank. All they’re trying to do is identify a good risk, they’re trying to identify a good entrepreneur to invest into. If just 1% of founders are succeeding, you have to demonstrate you’re something special. You have to be able to demonstrate you’re an investable entrepreneur.

Unless that investor can look at you and they can see that you demonstrate those three things, that you’re highly resourceful, that you understand the financial risks and that you understand how to create commercial success they’re not going to invest. So in the language of the investor, the way that we demonstrate these things is through the pitch assets, the projection assets and the plan assets. When these three critical fundraising assets come together, you end up in the top few percent of founders seeking investment.

Why not join us at our next Smart Cookies Breakfast Club session? Bitesize chunks of top quality content to help you take your business to the next level, all before 9 am!