According to StatCounter Global Stats, the research arm of a web analytics company, mobile and tablet internet usage exceeded desktop for the first time worldwide in October 2016. There is no doubt that people spend more and more time on their smartphones and tablets, not only searching the web but also making purchases and subscribing to services, even though in more mature markets, such as the US and the UK, desktop is still the primary mode of internet usage (55.6% vs 44.4% for the UK for example).

There are other clear indicators that this trend is here to stay, for example Google now using mobile-friendliness as a ranking signal on mobile searches. They’re also splitting their search index and giving priority to mobile over desktop. They even built a mobile-friendly test tool to measure your site’s performance and encourage you to make it mobile-friendly if it isn’t already. 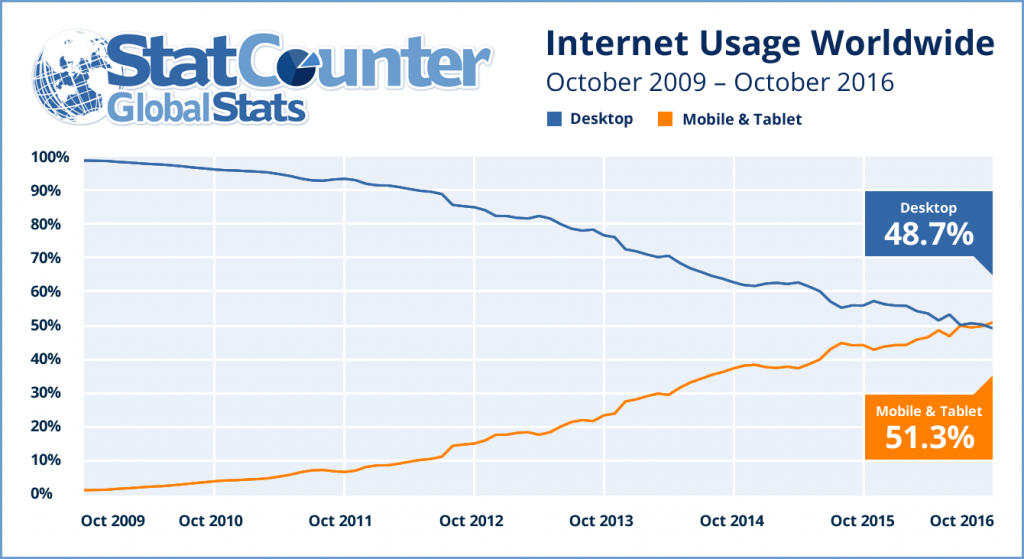 Now, having a mobile-friendly responsive website is one thing. But sometimes, what you want or need is a native mobile app. So, what are the differences between web responsive and native? What are the pros and cons? And which one is best suited to your business? These are all questions that come up almost every time when we discuss mobile apps with clients, and for good reasons because it is an important decision that will have an impact on your business. So let’s see if we can give you some useful pointers.

What are mobile web and native apps?

Mobile web applications are similar to desktop web apps. They are in fact the exact same website but displayed slightly differently so it fits the device you are using. It’s called responsive design. In some cases, the images are reduced or removed, the content is adapted to a mobile ‘on the go’ usage and secondary functionalities may be removed. But all in all, it is pretty much the same site, consisting of browser-based HTML pages linked together and accessed via an internet connection.

A native application, on the other hand, is an app that you download from a mobile marketplace, such as the AppStore or Google Play, and is then installed on your device. They work with the operating system that is ‘native’ to your phone or tablet (Android or iOs). These apps either pull information from the internet or download it so that the content is available offline. Google Maps is a good example of this: it downloads a route for you when you request directions, then uses your phone’s GPS to tell you where to go, so the functionality is maintained even without 3G/4G connection.

Listing all the pros and cons of mobile web apps and native apps could be quite wordy. So instead, I found this easy-to-read and easy-to-digest table on Joe Stangarone’s blog, which sums it up pretty well.

As you can see, the main cons for a native app is the cost and speed of development and maintenance. Another major difficulty is discoverability: native apps are not indexed in search engines, so discoverability is pretty low. However, they will allow you to use all the features of your smartphone, including push notifications and they also tend to run faster and to be more reliable.

Web apps on the other hand are easier and faster to build. You can also update/improve them very easily, without going through the store approval process, which can be lengthy and painful. It is also easier to drive traffic to it. However, they are still limited for certain features, even though Chrome on Android now supports push notifications.

“In other words, the Web is for audience reach and native apps are for rich experiences. Both are strategic. Both are valuable. So when it comes to mobile, it’s not Web vs. Native. It’s both.” – LukeW.com

What about hybrid apps?

A hybrid or progressive app combines the best of the mobile web platform and native apps. Progressive apps utilise HTML and JavaScript web technologies, like a mobile web platform would, but provide access to some of the features of native OS e.g. notifications, the ability to work offline etc, and can have an icon on mobile home screens, but is still based on the web. They take less time to build and only need one version to be compatible, unlike native apps that need multiple versions to work with the variety of devices available.

There are disadvantages to having a progressive web app, however. Many of them stem from the fact that they are still actually websites, just in disguise. As such, you can’t implement Twitter and Facebook integration very easily because they still require you to use web sign in. They also won’t work with smartphone features like Touch ID or fingerprint sign-in functionality. Progressive apps are relatively new in terms of development and certain API’s or plug-ins won’t function with them yet, or they may have bugs that require work and testing.

Whilst they’re still rising to the popularity of native apps, with technologies quickly catching up to meet the demands of developers and companies wanting to make use of them, many people see progressive apps to be the future of mobile engagement. Bruce Lawson, Deputy CTO at Opera, is a huge advocate of progressive web apps and did a talk on it last year at Render Conference.

To make an informed decision of what type of app you should choose, you need to fully understand how your user base is currently interacting with your content. Are they using desktop or mobile? Which mobile and tablet devices are they using? Are they actually asking for an app? Use Google Analytics to see who is visiting your website most on what device, ask for user feedback, then create something that best targets that audience. If your users are using mobiles primarily to view your site – and you have a service that would work for one – then you might find that an app will work better for you.

To warrant the creation of a native app, it has to serve a purpose that a website cannot on mobile or improve a purpose or service well enough that it will make you want to use the app on your phone/tablet/device in its place.

If you can afford the cost and lengthy development time, then you could have both a well-designed mobile website and a native app. You could make the mobile website more of a tool to drive people towards the app to make better use of your service, keeping the information on it to a relevant minimum.

Larger organisations or those that have a strong focus on social media engagement might find that a native app would be the optimum choice – this is especially true if you’re providing a service that could be well utilised with an app such as delivery, transport or e-commerce.

“The most disruptive products are apps: Uber, Instagram, WhatsApp and Snapchat – all of them taking full advantage of the underlying technologies of native: camera, phone, GPS, accelerometer, Bluetooth etc.” – Design+Code